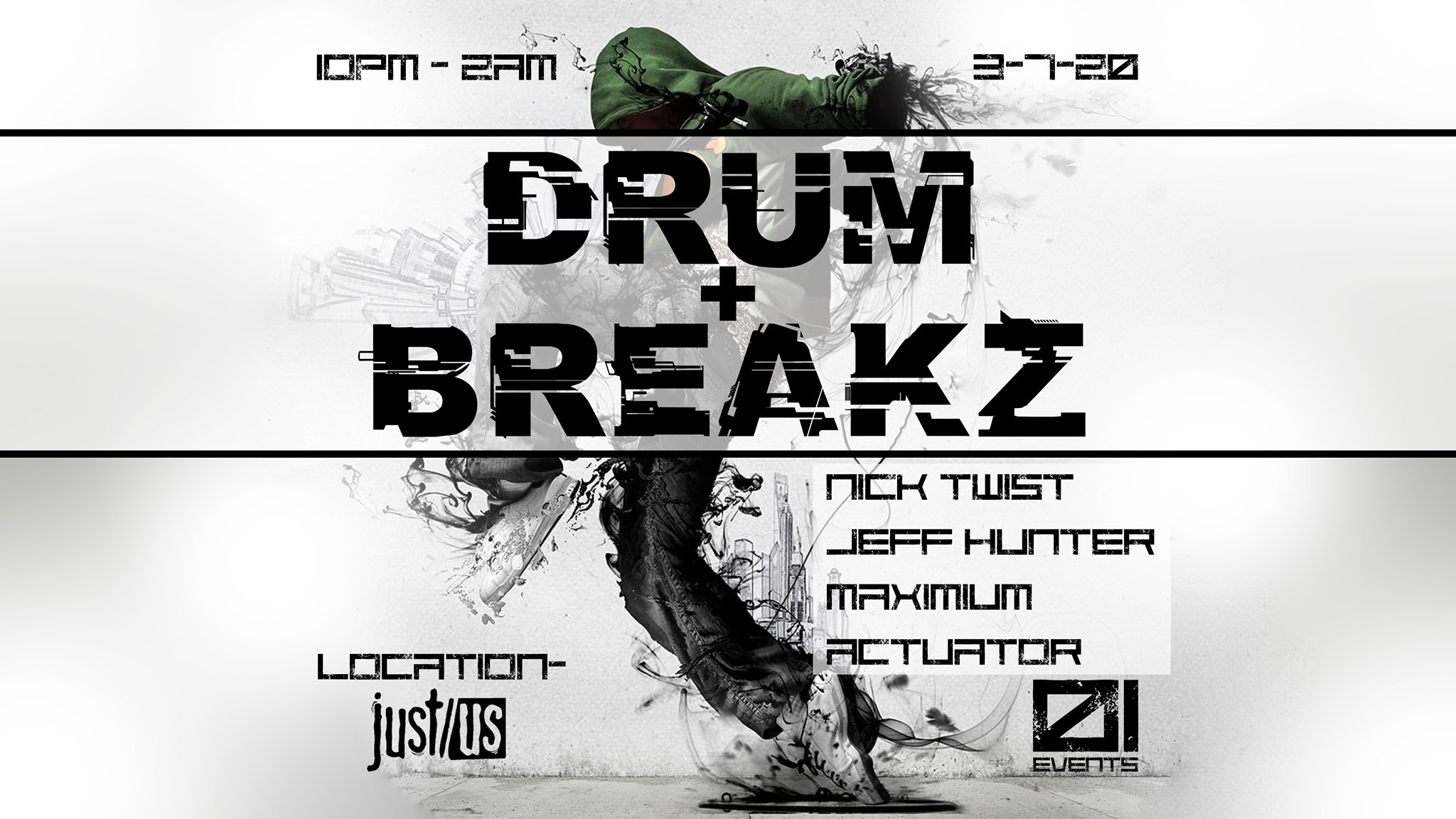 Take a break from 4 on the floor rhythm for a night and throw back to how it all began. Break beats were there in the beginning of dance music and have evolved into mind blowing sub genres of Drum & Bass, Trap, Dubstep, and of course Breaks! Let’s celebrate and explore what they’ve become by blasting the latest and greatest of this evolution through the speakers! SYOTDF.

We are very excited to have Nick Twist and DJ Jeff Hunter out to kick off this new event!!

Nick Twist - With a careful Ear, Technical skills and an ever growing music library of the Hottest Bangers and Coolest Melodies in the underground world you can Expect Dj Nick Twist to be on top of the Vibe. The only goal in his career is to keep the dance floor moving side to side. Whether in a high class club environment or the dirtiest of all night outlaw parties. Expect V.I.P mixes and Vinyl Only pressings. Expect Huge tracks and minimal melodies. Expect big things from the one they call Nick Twist.

Nick is an experienced entertainer with years of party rockin, event coordination, networking, and technical logistics knowledge behind him. Nick Twist is no stranger to the party vibe, or a set of decks. Having shared the stage with Artists the likes of Aphrodite, DC Breaks, Dirty Phonics, Danny the Wildchild, Dj Hype, Nc-17, Q-Bik, Crissy Chris and tons of other major heads in the Drum & Bass world, He's no stranger to switching up styles and setting vibes either.

He's been getting a lot of love in the Hip-Hop scene lately because of his Technical Scratch and Turntablism skills. His newest Project with 2JD, a Local Hip-Hop producer and lyricist, is quickly gaining recognition because of their Old Skool styled beats, and lyrical content brought forward with Nick's freestyle use of scratch samples over the instrumentals in their sets.

Hard work Prevails, and Nick Twist works hard to keep Drum & Bass music in in the ears of dedicated followers to earn his place in the top tier of DnB Djs world wide.

Jeff Hunter - Jeff Hunter was born and raised in St. Paul, Minnesota and while in high school, Jeff heard his first 'techno' song. It was 'James Brown is Dead' by L.A. Style. This was to be the beginning of his transformation into what we call a 'techno-head'.

The second catalyst of this transformation came about when Jeff journeyed to Duluth, Minnesota to attend college. While at college he had the opportunity to get a time slot on KUMD public radio. He hooked up with dj Diene and they became 'The Harmonic Sideshow'. This is where Jeff Hunter learned the sacred art of beat matching.

The third and final key to Jeff's transformation happened in the summer of 98'. He and some friends went to Milwaukee for a party. When Jeff got there he realized that this wasn't just a party, it was a rave. Proceed 98', outside Milwaukee, Wisconsin in a recreation center was where Jeff's transformation into a techno-head became complete.

Jeff has been back in the Twin Cities for quite a while now and he's been one of the driving forces behind the increasing popularity of breakbeat music in Minnesota and the surrounding states. His style is comprised mostly of various breakbeat sounds, including Funky, Acid, Progressive, and Nu-Skool Breaks as well as other bass heavy music such as dubstep, electro, and grime.

Jeff is also heavily involved in the Minneapolis music scene as a part of the legendary event promotion company, Sound In Motion.

All of us have to balance the light and dark in our life. Take the positive with the negative. Inhale, Exhale. Live the day and love the night. We’ll bring you light and poppy, Dark and heavy. From the circuitry in our machines that connect us, to the music in the air when we gather. Our intent is to create a balance between genres, styles, energies, and sounds. From the Dj’s we bring, to the cities we share in. We explore the yin and yang through Zero’s and One’s.